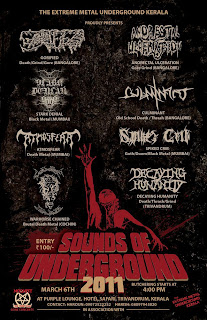 Let me move on to a summary of great gig I got to watch on Sunday at Purple Lounge. The most brutal fest Sounds Of Underground 2011 presented by the extreme metal underground Kerala and it was the first edition of the fest. I’d like to thanks Harish and Haroun for everything. Those guys have done a big thing for us and a big cheer to everyone who involved in the show.

We started our journey to Trivandrum on a Sunday morning. At 5.30 pm, half an hour after the Decaying Humanity show, we've arrived at Purple Lounge. Some people were already there outside. The Sounds of Underground in Purple Lounge seemed a suitable venue, a very small room but it managed nearly about a hundred metal heads in there. The gig started at 5.pm. I missed Decaying Humanity even I heard that the evening begins slowly and calm with the opener Decaying Humanity. They have covered A Violent Scene Of Death from Torture Killer. Ramesh was on the guest vocals besides, Brave New Hell from Bloodbath, Fisted On The Dance Floor from Gut and their own composition called God of Misery.

The second band of the day was Spiked Crib from Mumbai and they play like Death/Black metal elements. Musically Spiked Crib were neat. So let’s call it good. But they didn't really win me over. They ended with Iron Maiden’s classic Fear Of  The Dark. The Maiden’s fans sung with them and members played instruments very well. I can honestly say I’d never heard of them before. The next band on the stage was Culminant. Started playing at 6.53 pm. Culminant are just perfect. Powerful vocals with super drumming. Played a track from Slayer. Those guys ended the performance at 7.25 pm. Their powerful riffs and vocals made crowds to mosh. Actually I was not in a good mood to enjoy them as I was having company with some of my buddies. I got a chat with Cliff and Charles. This Bangalore team (Culminant) certainly didn't impress me much. Culminant will always be respected by true thrash metal heads.


Atmosfear, a death metal act from Mumbai, went on stage for the next more than 30 minutes. After watching this band I can say that Atmosfear played a pure death metal. They were awesome at Purple Lounge. I can tell you all they're a very enjoyable band with very enjoyable set. Gorified were the next band on the stage. And I got ready to mosh during the coming band, but it wasn't GORIFIED. playing now, Anorectal Ulceration, they play sick Goregrind from Bangalore. A well known band for singing songs about pussy (not for Satan) and the first time on a stage in Kerala. During the first song I really felt that the show is going to be pretty sick. Anorectal Ulceration treated us with Embroyo and Consequence. The most of the crowds were not supporting them much. I know AU are for sick fuckers only, others away. I personally love Anoreactal Ulceration band and sincerely hope they get back again in Kerala. Gutslit in Trivandrum.!! How great is that!!!!! Gutslit for the first time played live in Kerala and the responses were fucking great. New vocalist Aditya Barve was quite energetic. I am extremely impressed by the Aditya’s vocals for the most parts. Definitely the best band of the night. Wish I had long hair for Catherine Wheel. Amazingly brutal death grinding performances which I am always going to remember.

Gutslit's setlist:
After a relatively short wait. The second last band Gorified went on the stage. I was so fucking excited to see this band. They played about 35 minutes of grinding. A memorable performance of Charlie and his gore factory. Gorified are without a doubt one of my favorite bands in India. Warhorse Chained were the finishing act of the night. A brutal death act from Cochin. They certainly need no introduction. The band with the largest crowds that night. Their music is so fast and brutal, they could really came out strong in a Deicide kind of way. For me it was an okay gig but the crowds were pretty wild for them. The event ended up at 11 pm and they were just amazing in the end with a blasphemous track from Cryptopsy. (A good news for Warhorse chained’s fans, They gonna release their first EP this year. We can only wait and see). 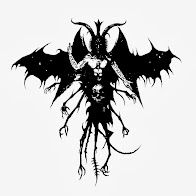